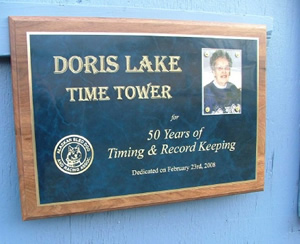 In 2007 ASDRA lost a long time friend with the passing of Doris Lake. Doris was a musher who enjoyed the sport, but she gave most of her time to timing races for ASDRA and other statewide events. She would be near the start line of any race and in more recent years could be found in the time tower at Tozier Track. Beyond the timing Doris contributed our race history with her record keeping. Doris kept accurate records of ASDRA races beginning in the mid 40’s and until she retired. All these were carefully preserved in a notebook which has been turned over to ASDRA, Doris’s 50th year of timing coincided with her 80th birthday. Doris could tell stories of all the old timers in the sport and enjoyed sharing tales of early mushers including Doc Lombard, the Reddingtons, George Attla, Gareth Wright and her late husband Orville Lake.
Doris retired to live near her daughter in Phoenix and spent several vacations in Hawaii. In 2006 she came “home” to serve as the Lady Trapper in Fur Rendezvous. She made short visits in 2004 and in 2005. It was only fitting that we honor Doris by dedicating our time tower in her name. 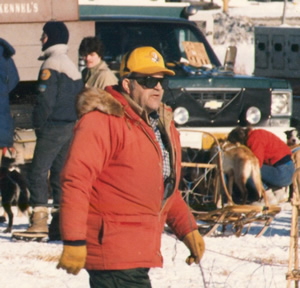 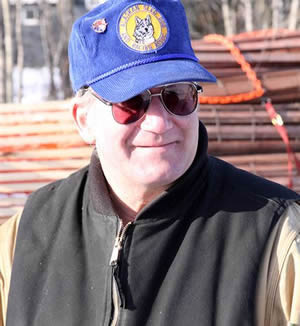 What can you say about John Rasmussen? He is one of nicest men you will ever meet, never a unkind word comes from his mouth, always helpful in anyway he can. John has been involved with ASDRA for over 30 years. During the racing season before the first dog or owner leaves his warm bed, John is already at the clubhouse getting things ready for that days race, whether its shoveling the walkways, getting the PA system ready or putting the last touches on the trail, he seems to always be the first one there and the last to leave. John serves as our Race Manager during our race season fittingly so, If you ever have a question about anything that has to do with the Track or the Trail you will usually hear someone say “go ask John”. He usually does the little things that just seem to get done around the track. Last year we mentioned that we were dedicating the clubhouse in his name. We asked him “what would you like the sign to say?” It took awhile and finally he said it would be nice to involve his family, (John’s wife Bunny was also a big part of the ASDRA) so this year the RASMUSSEN CLUBHOUSE sign will be unveiled. If you see John around Thank Him for his tireless efforts, his kind heart, his good nature and above all that, tell him he is a huge part of making ASDRA what it is today.