History of the OWC Race

The following article written for the 1961 ASDRA Dog Musher publication details the early history and evolution of the race. 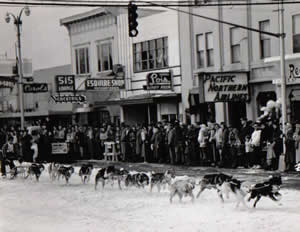 Bigger and Better
By Doris Lake

Many areas kept the sport of dog racing alive, but in the more populous areas, where the cities were growing by leaps and bounds there was no time to be bothered with dogs. In Anchorage an occasional challenge would be made and accepted and the people would gather for the fun, but with the war, even that stopped.
In 1946, a local dog team owner and race enthusiast, Earl Norris arranged a 17 1/2 mile exhibition race with Jake Butler of Gulkanna and a freighting team from Fort Richardson.

An impressive crowd stood at the finish line to see Jake win the event, and their enthusiasm led the principals in the race to plan a repeat performance for the following year. The 1947 race had 5 entries with the leaders again being Earl Norris and Jake Butler. If the Anchoragites needed a thriller to convince them of the need for this Alaskan sport, this race certainly strengthened that belief and led to the future Alaskan Championship Race. Going into the last lap Jake led Earl by 2 minutes but Earl worked every step of that trail and with each report he had narrowed the lead until he passed Jake just before the finish line and won the event by eighteen seconds.

The two races and high enthusiasm had led more people in this area to raise dogs for competition but the winter of ’47-’48 was a season of dog diseases and many an aspiring dog musher was forced to wait another year, but there were still five local teams in the 1948 race with Earl Norris winning again. In October of ’48 a group of people interested in sled dogs formed the Alaskan Sled Dog & Racing Association. Weekly dog races were scheduled and the Alaska Championship became a reality. $1500 was put on the 1949 75-mile classic, with 12 teams competing. Due to the illness of Earl Norris his wife Natalie stepped in at the last minute and made Jake Butler work hard for his win.
Prize money was increased to $3000 and the mileage increased to 100 miles for the 1950 classic. Dan Snyder, Kotzebue, the 1949 North American Champion, Earl Norris, Jake Butler and eleven other drivers were all unsuccessful in overcoming the 6-minute lead racked up the first day by a young novice Gareth Wright. It was proven 3 weeks later that Gareth’s win was no accident for he took the North American and became the first man to win the Duel Championship.
In 1951 the prize money was increased to $6000 and 23 teams from all over the territory were entered, and a shy, quiet young man from Galena, Raymond Paul won his first Championship race. The last lap of the event, a record was set when Earl Norris made the time of 1:37:27. Another racer, Howard Luke, suffering pneumonia, left the hospital long enough to finish the race.
In 1952 and ’53 the prize money was down to $2000 and $1000 respectively. In 1952 Gareth Wright defeated a field of 11 mushers and set the record for total elapsed time for 100 miles with 6:55:18. Clem Tellman, Knik Homesteader, won the next race from 11 local mushers in his first attempt at racing.
In 1954 the prize money was increased to $4000 and a New England racer, Billy Belletete was in the field of 12 teams. Raymond Paul won the race here and then went on to become the second Duel Champion. Again in 1955 Raymond won the title and retired the Al Fox trophy. 15 mushers competed for $4500, but most of the attention was focused on two teams; Kit MacInnes who finished in second place, and on Lloyd Van Sickle, Truckee, Calif., who was driving a team of Targhee Hounds. The dogs however were unable to run on the narrow trail and Lloyd was forced to drop out after the first day.
The race in 1956 was cut down to 75 miles. For the first time prize money of $6500 was broken down to pay day Money as well as total elapsed time, and 21 teams were entered from all over the territory. Another name was added to the Elite of Dog racing when Jimmy Huntington of Huslia led all the way in the Anchorage race and then later won the Fairbanks event for his Dual Champion Title.
The fame of the race and $6500 prize money again offered in 1957 drew even more famous names for the list of 22 entries. Two great Dual Champions, Gareth Wright and Raymond Paul battled right down to the finish line; with Gareth finally edging out the Galena flash. That was the last time we were to see Raymond, for three month later he drowned in the Yukon River.
In 1958 a new name was added to the Anchorage race. The winner of many New England and Canadian Championships, Dr. Roland Lombard, flew his dogs from New England to compete against 24 teams from all over Alaska. This race was a real thriller, with tying times turned in the first and second heats for the day money. George Attla was the second Huslia driver to win the event.
Some of the villages began holding elimination races in 1959 with the idea of sponsoring the best team from that area to the Championship Races. The 25 team field consisted of champs, ex-champs and the best the State could offer along with Dr. Lombard from the south 48. Jimmy Malamute (half brother to the late Raymond Paul) from Galena won the crown with the record time for 75 miles of 5:30:48, but the day money was well distributed among different villages.
The 1960 classic drew 24 top Alaskan teams as well as Dr. Lombard and another top New England musher, Dr. Charles Bleford. This will be a race long remembered, for when the total times were tallied for the 75 miles only 74 seconds separated the top 3 teams. Another Huslia racer, Cue Bifelt, was the winner and later entered the small circle of Dual Champions.
Each year teams from new villages are added to the entries, and more of the towns are holding the elimination races to send only the best they have. With the quality of the teams improving all the time the race itself is improving, and each race is more exciting than the previous one. No one team is running away from the field as in the early days of the race. The certainty of good prize money has been largely responsible for the success of our race and it will continue to draw top teams from all over the States and will in time, we hope, bring international teams to compete for the enjoyment of the avid dog racing fan.